Built on a background of working with NASA materials and planar magnetic technology, California’s young start-up Audeze recently inducted a new member into their family. Now sitting alongside LCD-4, which clock in at just shy of four thousand euros, the Sine comes equipped with their CIPHER Lightning cable for that pesky iPhone 7 problem. 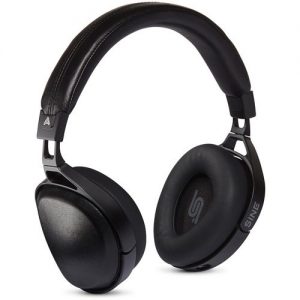 Funnily enough, that choice to “go Lightning” predates Apple’s announcement to rip out the headphone port by months. Audeze had already cracked offering a better quality of sound by opting for the new port, and adding a small amplifier and DAC (Digital Audio Convertor) about the size of a USB stick into the CIPHER cable itself (if you’re not sure what a DAC is, check out this article).

Unlike most headphones, Audeze uses a super thin magnetic diaphragm instead of dynamic drives. As thin as an human hair, the diaphragm changes rapidly to suit the input signal, resulting in a clear, accurate sound. With a robust, black aesthetic courtesy of Designworks (a subsidiary of BMW), they look the part of any top-end, high tech headset, and sit at €450.